Winter weather brings many hazards for those individuals who have to experience it where they live and work. Whether it is driving in poor conditions or having to clear snow, any task done in winter weather conditions often results in a higher chance of injury. One winter weather  work task that can easily result in injury is shovelling snow.

Shovelling snow is a straight forward process, but it is a work task that often ends in injury both on the job and at home.

While the task of shovelling snow is a straightforward one there are many injuries that can occur while performing this task. Consider the injuries mentioned in this talk and the steps you can take to avoid an injury the next time you have to shovel snow. 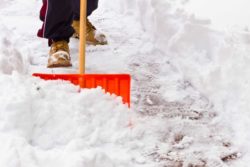