Every year on April 28 we pay our respects to, and remember, the thousands of workers who have been killed, injured or suffered illness as a result of work-related incidents. Sadly, Alberta lost 162 men and women to workplace injury or illness in 2018. On April 28, we remember.

The National Day of Mourning is not only a day to remember and honor those lives lost or injured due to a workplace tragedy, but also a day to collectively renew our commitment to improve health and safety in the workplace and prevent further injuries, illnesses and deaths.

On April 28th the Canadian flag will fly at half-mast on Parliament Hill and on all federal government buildings. Employers and workers will observe Day of Mourning in a variety of ways. Some light candles, lay wreaths, wear commemorative pins, ribbons or black armbands, and pause for a moment of silence at 11:00 a.m.

It is as much a day to commemorate those workers whose lives have been lost or injured as it is a reminder to strengthen our resolve and establish safer work practices and conditions. Together we can work toward a safer workplace for all Albertans.

The most recent statistics from the Association of Workers’ Compensation Board of Canada (AWCBC) tell us that in 2017, 951 workplace fatalities were recorded in Canada, an increase of 46 from the previous year. Among these deaths were 23 young workers age 15-24.

Add to these fatalities the 251,508 accepted claims (an increase from 241,508 the previous year) for lost time due to a work-related injury or disease, including 31,441 from workers aged 15-24, and the fact that these statistics only include what is reported and accepted by the compensation boards, there is no doubt that the total number of workers impacted is even greater.

It’s not just these numbers we need to reflect. With each worker tragedy there are loved ones, family members, friends and co-workers who are directly affected, left behind, and deeply impacted- their lives also forever changed. 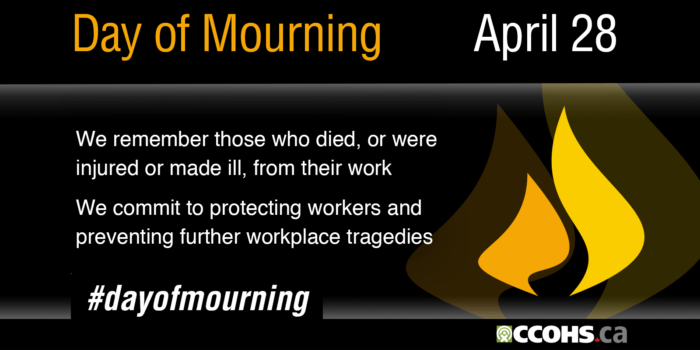