Elimination of Hazards – Hierarchy of Controls

A common version of the hierarchy from most effective to least effective control is listed as: elimination, substitution, engineering controls, administrative controls, and PPE. Elimination should always be considered first when attempting to mitigate hazards in the workplace.

Relying on Lower Levels of Controls

If employees are not trained to eliminate or use effective engineering controls to protect themselves against hazards, many of them will settle for some type of PPE to attempt to mitigate the chance they are injured. This is not an effective way to prevent injuries and accidents. Safeguards that would fall under the PPE level of the hierarchy of controls are far less effective than safeguards that eliminate or engineer out hazards.

An example would be relying on a pair of gloves to protect your fingers from a pinch point hazard instead of ensuring there is a proper guard around the pinch point.

PPE should always be considered the last line of defense and employees should have this mindset as well.

Elimination of hazards is the most effective way to protect employees against injuries. However, far too often companies or individual employees do not take the time to plan out work tasks or the time to actually eliminate the hazards they are faced with. Everyday millions of workers are faced with hazards that they do not need to be exposed to.

Proper planning of work, thinking about alternative safer ways to complete a work task, and allocating the necessary resources to complete the task are some of the first steps supervisors can take to begin to eliminate hazards. At the worker level, hazard recognition and the elimination mindset is important to ensure any additional hazards are eliminated.

ABC Construction Company is excavating and moving excessive dirt for a footer of a large warehouse. Due to excessive rain, the site conditions make it very dangerous for dump trucks to operate. The superintendent decides to shut down dump trucks for the day. 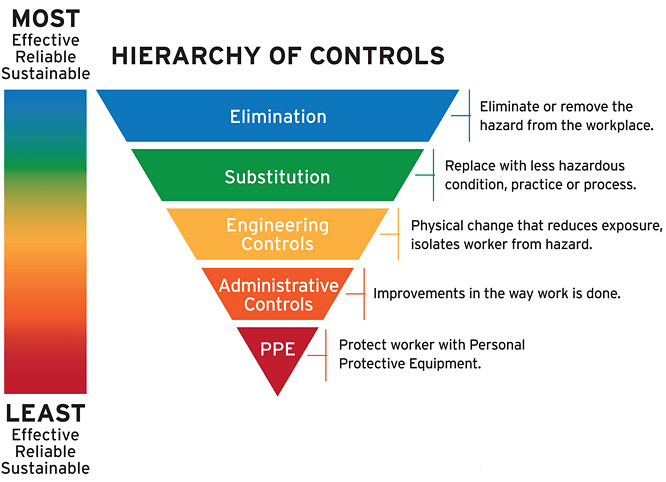